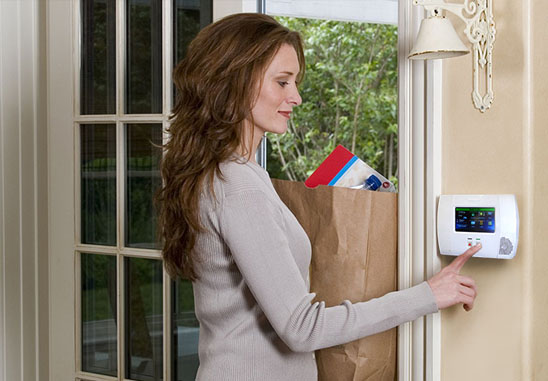 This fictional scenario is based on actual call to our central monitoring station. It underlines the importance of arming you home security system.

Recently, Mrs. Fletcher was home alone during the day and she had set her alarm.  She does this as a habit just to be on the safe side.  Many people do the same thing as this gives them a sense of feeling secure.At 1:30 in the afternoon, her alarm suddenly went off.  The loud noise startled her but she knew what it was so she went into a bedroom and closed the door.  The ADS monitoring station immediately called Mrs. Fletcher on her mobile phone.

Mrs. Fletcher stated her husband was at work and the kids were in school.  She requested that we dispatch the police.  Because Mrs. Fletcher was in the house when the kitchen window activated the alarm, the police arrived quickly, hoping that the intruder did not gain entry.
The police officer found that the kitchen screen had been forced out and that the window was pried open, however there was no sign of the intruder.  Apparently, the alarm siren scared them away.

Mrs. Fletcher was very grateful for our fast response and that of the local police.  She was very fortunate that she thought to set her alarm while she was home that day.
If maintained and used properly, alarm systems can protect property and potentially save lives.  The Fletcher Family remains safe and sound.

Alarm Detection Systems Inc. offers a broad range of services including security, monitoring, fire systems, managed access, video surveillance, video verification and wireless radio communication.  Many ADS systems have app capabilities on phones or other Internet devices.  These features are especially important to people who travel on business and need the reassurance that everything is as they left it.

ADS operates award-winning, certified monitoring centers in Aurora, Illinois and Louisville, Colorado. They offer personal alarm verification to accounts near the Aurora facility, sending an employee to check on an active alarm or meet with the police. When someone attempts a break-in, it is important to have prompt detection and alert the proper authorities.

If you have any questions on how to maximize the effectiveness of your alarm system, a trained ADS representative is available to speak with you. Call 630.844.6300 to learn more about your alarm system.